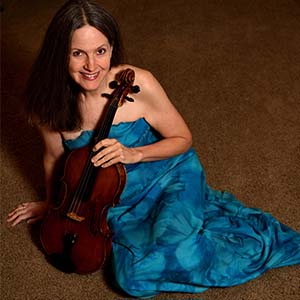 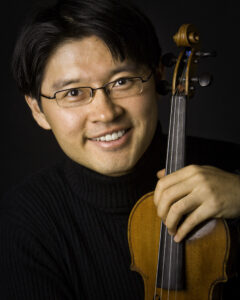 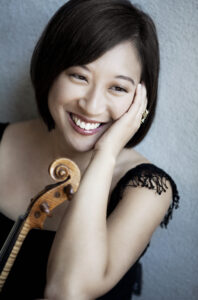 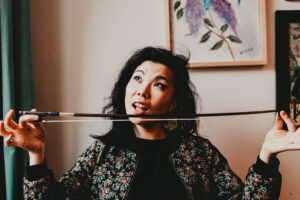 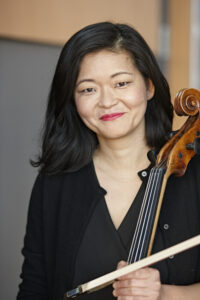 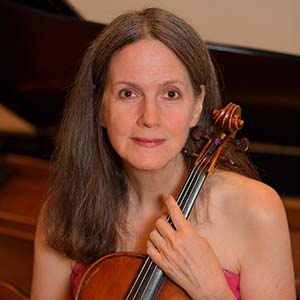 Ms. Oakes programming and interdisciplinary interests have led her to coordinate and program many large-scale projects. In 1997, Ms. Oakes co-founded and then subsequently served for nine years as a co-artistic director of the Foothills Music Festival in Winston-Salem, North Carolina. In her current role as the director of UISQRP, Ms. Oakes has created multi-dimensional artist-residencies with quartets from across the US and abroad, including the Brentano Quartet, JACK Quartet, the Cavani Quartet, the Parker Quartet, the Elias Quartet, the Dalí Quartet, the Daedalus Quartet, the Spektral Quartet, the Ariel Quartet, the Jupiter Quartet, the Jasper Quartet, the Pacifica Quartet, the Miró Quartet and the Castalian Quartet. During her tenure at the University of Iowa, Ms. Oakes has coordinated several large events, including Scandinavian/NordicFest—a month-long festival with chamber music at the heart of all events, which included film, theater, dance, lectures, recitals and outreach. Ms. Oakes also teamed up with the University of Iowa Music Therapy department to present Music, Healthcare and Well-Being, programming focused on the relationship between music and health. She has been the recipient of numerous grants from major granting organizations, such as Chamber Music America, the Iowa Arts Council, Humanities Iowa, the University of Iowa’s Ida Cordelia Beam Distinguished Professorship Program and the John and Anna Hanes Foundation.

A devoted teacher, Ms. Oakes has received repeated recognition for her work at the University of Iowa. In 2016, she was awarded the Dean’s Distinguished Lecturer award in the College of Liberal Arts and Sciences and most recently, she was awarded the President & Provost Award for Teaching Excellence for 2020-21. She has given numerous master classes and presentations across the country including Peabody Conservatory of Music, Oberlin Conservatory of Music, Cleveland Institute of Music, Harvard University, Arizona State University, University of Texas at Austin, University of Massachusetts, Amherst and most recently at Dalhousie University in Halifax, Canada.

Ms. Oakes is a graduate of Oberlin Conservatory, where she received a Bachelor of Music degree in viola performance as a student of Jeffrey Irvine. She continued with a Master of Music degree from the Cleveland Institute of Music with Heidi Castleman and a Graduate Performance Diploma from the Peabody Conservatory of Music. At the Juilliard School, she served as a teaching assistant to Sam Rhodes of the Juilliard Quartet. As part of the Maia Quartet, she worked intensively with the Cavani Quartet, the Juilliard Quartet, the Tokyo Quartet and Earl Carlyss.

Indian-American composer Reena Esmail works between the worlds of Indian and Western classical music, and brings communities together through the creation of equitable musical spaces.

Esmail’s life and music was profiled on Season 3 of PBS Great Performances series Now Hear This, as well as Frame of Mind, a podcast from the Metropolitan Museum of Art.

Esmail divides her attention evenly between orchestral, chamber and choral work. She has written commissions for ensembles including the Los Angeles Master Chorale,  Seattle Symphony, Baltimore Symphony Orchestra and Kronos Quartet, and her music has featured on multiple Grammy-nominated albums, including The Singing Guitar by Conspirare, BRUITS by Imani Winds, and Healing Modes by Brooklyn Rider. Many of her choral works are published by Oxford University Press.

Esmail is the Los Angeles Master Chorale’s 2020-2025 Swan Family Artist in Residence, and was Seattle Symphony’s 2020-21 Composer-in-Residence. She also holds awards/fellowships from United States Artists, the S&R Foundation, the American Academy of Arts and Letters, and the Kennedy Center.

Esmail was Composer-in-Residence for Street Symphony (2016-18) and is currently an Artistic Director of Shastra, a non-profit organization that promotes cross-cultural music connecting music traditions of India and the West. 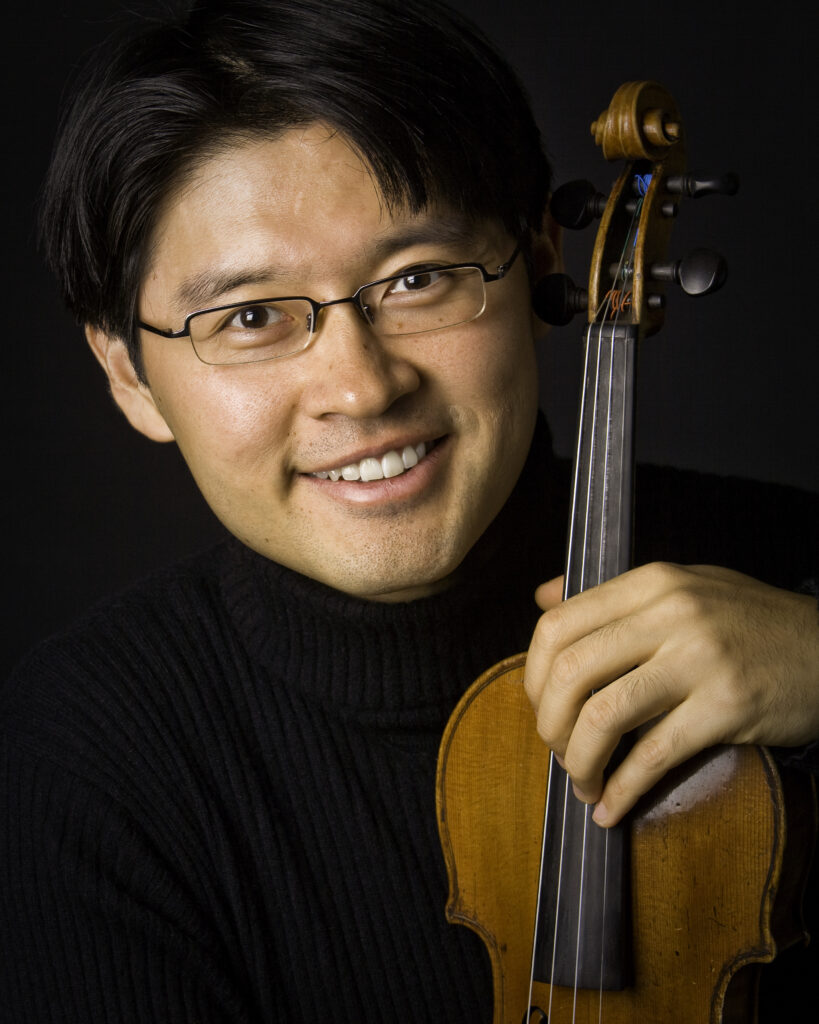 Artistic Director and Principal Violin of The Saint Paul Chamber Orchestra, Kyu-Young Kim is one of the most versatile and accomplished musicians of his generation. His appointment as the SPCO’s Artistic Director in January 2016 marks the first time a playing member has been tapped to take the artistic helm of a major American orchestra. Previously, Kim served as Director of Artistic Planning with the SPCO while continuing to perform in the orchestra. Since assuming his dual role in 2013, the SPCO has named many new Artistic Partners, opened its new Concert Hall at the Ordway Center for the Performing Arts to great critical acclaim, toured throughout the U.S. and to Europe, and won a Grammy Award in 2018 for its disc of Schubert’s Death and the Maiden with violinist Patricia Kopatchinskaja. 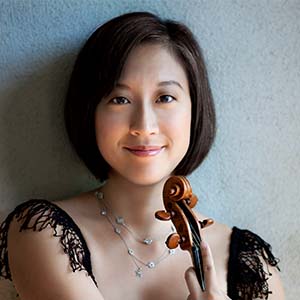 A violinist of great range and energy, Salley Koo has performed internationally as a solo, chamber, and orchestral musician.  Recent performances include appearances at the Musikverein in Vienna, Carnegie Hall, Town Hall, Central Park, Music from Salem, the Kimmel Center in Philadelphia, the National Cathedral and National Gallery in Washington D.C., Columbia Museum of Art, the Harris Theater in Chicago, the Nasher Series in Dallas, the Peoples Symphony Concerts, the Ojai, Tanglewood, Ravinia, Skaneateles, and Caramoor Festivals, and on tour alongside artists ranging from Bela Fleck to Dawn Upshaw to Gil Shaham.  Salley soloed with the Lebanese Philharmonic Orchestra and recently returned a third time to Lebanon as artist in residence with the IMAGINE Workshop and Concert Series at the Lebanese American University in Beirut, Lebanon.  She is regularly invited as a guest artist with groups such as the Minnesota Orchestra, Orchestra of St. Luke’s, East Coast Chamber Orchestra, Saint Paul Chamber Orchestra, the International Contemporary Ensemble, and the Knights.

Dr. Koo’s engagement with the chamber music community in particular has yielded collaborations with world-renowned musicians including Peter Frankl, Yo Yo Ma, and Colin Carr, as well as with members of the Orpheus Chamber Orchestra, Peabody Trio, Emerson Quartet, and Takacs Quartet.  Her expansive musical interests range from early music to contemporary compositions.  In the former vein, she has performed in period groups and recorded for Centaur; in the latter, she has worked closely with composers like Julia Wolf, Mario Davidovsky, Steven Mackey, Osvoldo Golijov, as well as members of the So Percussion Quartet.  Salley is also a familiar face at numerous festivals including the Chamber Music Silicon Valley, Yellow Barn Music Festival, Taos School of Music, the Tanglewood Music Center, Pacific Music Festival, and Thy Chamber Festival in Denmark.

Despite a performance itinerary that has covered North America, Europe, the Middle East, and East Asia, Dr. Koo has established a thriving teaching career.  She is currently the violin professor at both Adelphi University in NY and Montclair State University in NJ, and is also a visiting lecturer at the University of Illinois at Champaign-Urbana this year.  Previously, Dr. Koo has served as the violin professor and coordinator of chamber music at the University of Connecticut, in Storrs, CT; other faculty appointments include the Green Lake Chamber Music Festival in WI, Apple Hill Center for Chamber Music in New Hampshire, Dwight-Englewood String Society in New Jersey, Vermont’s Young Artist Program at Yellow Barn, the Opus 118 We Want Music! program in East Harlem, New York, Elm City ChamberFest, and the Neighborhood Music School in New Haven, Connecticut.  Salley also maintains a limited private studio in New York City.

Hailing from Chicago, where she studied with Almita and Roland Vamos at the Music Center of the North Shore (now Music Institute of Chicago), Salley then earned her undergraduate degree from Harvard University in English and American Literature, continuing her violin studies with Lynn Chang.  She subsequently received a Master of Music and pursued Artist Diploma work from the Yale School of Music under the tutelage of Peter Oundjian.  She completed her Doctor of Musical Arts in violin performance at Stony Brook University under Pamela Frank and Philip Setzer.  Over the course of her extensive training, Dr. Koo has studied with numerous other luminaries, including David Taylor, Sylvie Koval, and Dorothy Kitchen.

Salley currently performs on a violin made for her by Mario Miralles.  When she’s not playing the violin, she’s likely to be found cooking or planning where to eat next with her husband, Alex, or playing with their dogs in Brooklyn’s Prospect Park. 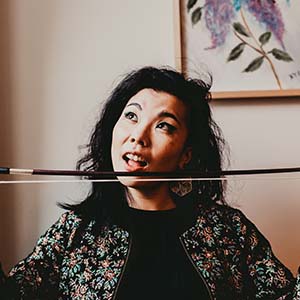 Hailed for her “magnetic, wide-ranging tone” and her “rock solid technique” (Philadelphia Inquirer), violist Ayane Kozasa enjoys a career that spans a broad spectrum of musical personas. A violinist turned violist, she was inspired to dedicate herself to the alto clef when she discovered the beauty of playing the viola part in string quartets during her undergraduate studies at the Cleveland Institute of Music. Her commitment to pursue a life in viola led to a graduate degree from the Curtis Institute of Music as well as a Further Masters Degree from the esteemed Kronberg Academy Masters School in Germany.

Ayane’s solo career took off when she won the 2011 Primrose International Viola Competition, where she also captured awards for best chamber music and commissioned work performances. Following the competition, she joined the Astral Artists roster, and became a grant recipient from the S&R Foundation, an organization recognizing and supporting young, aspiring artists of all mediums. Her international solo opportunities have been a platform to unearth seldom heard works and commission new pieces, an aspect of viola playing that she loves. Most recently, she commissioned a work by Brooklyn composer Paul Wiancko for viola and piano, which she premiered at the Philadelphia Chamber Music Society and Every Chamber Series in Washington, D.C. with pianist Amy Yang.

Chamber music has also been a vital part of Ayane’s musical career, and her interests have led her to appearances at numerous festivals including the Marlboro Music Festival, the Caramoor Center for Music and the Arts, the Olympic Music Festival, and the Ravinia Festival. She is a founding member of the Aizuri Quartet, the 2017-18 Quartet-in-Residence at the Metropolitan Museum of Art, grand prize winner of the 2018 MPrize Chamber Arts Competition, and first prize winner of the 2017 Osaka International Chamber Music Competition. The quartet has proved to be a multi-faceted group, commissioning and touring works by world-renowned composers such as Caroline Shaw, Yevgeniy Sharlat, Paul Wiancko, Lembit Beecher, and Gabriella Smith, as well as pushing the boundaries of unique and thoughtful programming. Their debut CD “Blueprinting” was recently released on New Amsterdam Records, a record of works by the aformentioned composers. Her passion for chamber music has also blossomed in the form of the viola/cello duo “Ayane & Paul”, and eclectic string trio “Bird’s Eye Trio”, both known also for their creative programming and intimate connections with their audience.

Ayane is deeply grateful for the mentorship she received from her past teachers, Nobuko Imai, Kirsten Docter, Roberto Diaz, Misha Amory, and Michael Tree. Outside of music, she loves to perfect her pie baking skills, create fonts, go camping, and run into the ocean. 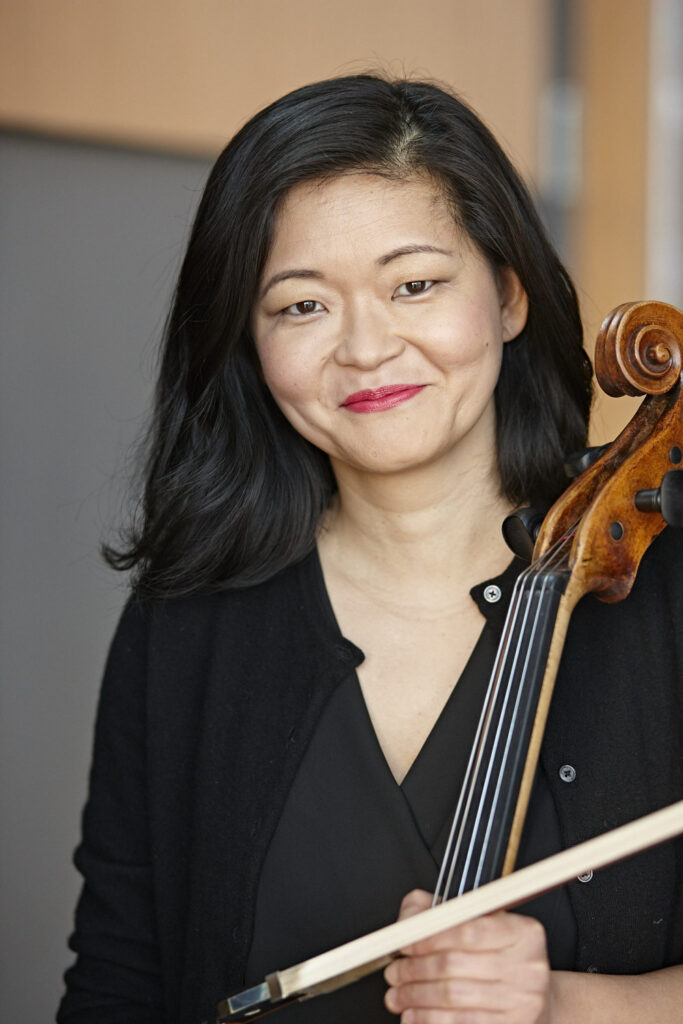 Cellist Pitnarry Shin has been praised in Strad magazine for her beautiful tone and passionate interpretations in her New York debut recital at Weill Hall, Carnegie Hall.  She has toured throughout the United States, Europe, and her native Korea. Ms. Shin was the recipient of a Fulbright Grant to Germany, which allowed her to participate and perform in several European festivals such as the Manchester Festival, the Kronberg Festival, and the Ensemble InterContemporain Summer Festival, where she played solo cello under Pierre Boulez.

Ms. Shin was a member of the Minnesota Orchestra from 2001 to 2006 and returned as a full time member again in 2012.  In addition to her orchestral work, she serves as an artistic director of the Bakken Ensemble. Previously, she has served as guest co-principal cellist with the London Symphony Orchestra and as acting principal of the Singapore Symphony Orchestra.  She has also played with the New York Philharmonic on their historic tour to North Korea, and with the Orpheus Chamber Orchestra. Ms. Shin received her musical education at the Curtis Institute of Music, Yale University Music School, where she received the Aldo Parisot-Yo Yo Ma Prize upon graduation.